skip to main | skip to sidebar

Back on track with mining

Okay, so after around 8 days the war was over. Initially our alliance took a fair amount of losses from various battlefleets, but a few days in the tides turned and we gave them a good hiding for a while...

I'm not 100% on what went on, unfortunatly due to real life stuff, I was wasn't online through most of the war, so I didn't get a chance to test out my Rifter for pvp - only a few security missions here and there (for the most part it was great).

I know that both sides agreed on an unofficial ceasefire and about a day or so later the war had ended. I recieved an email and won't go into all the details but I believe money changed hands to protect one of our POS, whatever your opinion on this - from what I gather protecting it with force, we stood to lose many ships and it came down to a cost vs benefits scenario - so I guess this was a sensible solution.

So, here I am back to mining and carrying on learning skills. As I mentioned in a previous post I was given a Retriever, which I kitted out yesterday with some Strip Lasers - boy are they quicker! I can mine a lot more in a shorter space of time and solo mining is nowhere near as bad with the increased cargo space. All in all I'm having a blast in EVE - I realise there is so much I don't know but at the moment, I'm really just trying to concentrate on mining and making some decent money. If I try and be too many things at once, I'm going to lose the plot I think lol. When I've got to a better stage I'll probablly do what most seem to, running another account paid for by ISK for hauling and pvp but until them I'm happy mining!

So apart from the threat of imminent war, nothing much has happened during the week.  I've been learning skills - particularly Industrial 5, which has allowed me to train for Barges.  I've spent all day Saturday mining in a small group (using a probe kitted out with mining II lasers, which was given to me) and have also half kitted out a Rifter for tommorow, which I think is a cool looking ship. 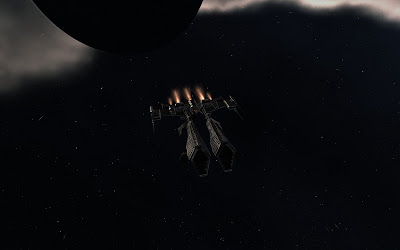 As I mentioned in my previous post, mining ops have been suspended, so the alliance is calling for anyone (including noobs), to try and participate in pvp - it will be my first time, so I haven't got long to learn some basics and I think I should definately get some insurance!  Good job I didn't buy those expensive implants today that I was going to.  I'll be giving some more details over the coming details of the turnout of the war.
Here's some randoms of me mining today: 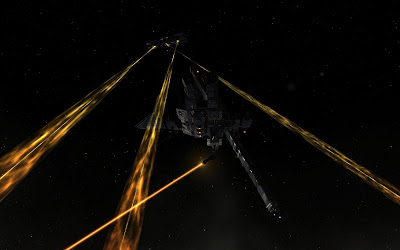 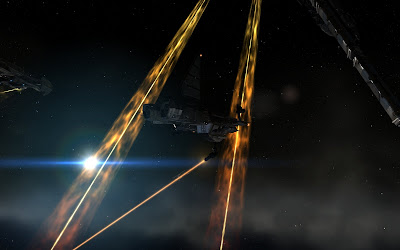 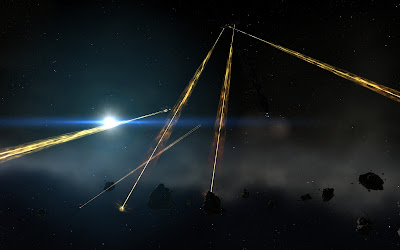 Well not us specifically but our Alliance, which obviously means were at war too.  I think it's about 12 hours until we are officially at war again.  All mining operations are suspended until war end, damn it.  The good thing is a kind corp member gave me a Retriever today, so I'm training barges level 3 at the moment and when the war is over I'll be able to use it, great!
Posted by Matt at 11:28 No comments:

Corp members pointed me in the direction of this mining guide : Halada's Mining Guide v3.0 - Extended

As far as I know it's the latest version and I thought it would be a good idea to post up in case any other noobies end up reading the blog.

I'm only part way into reading it, but it's very informative and easy to read/understand, which is how I prefer it lol.  Anyway direct download link is here for anyone that wants it :

So most of yesterday was spent doing missions in and around the surrounding systems of Aydo.  I'm currenly waiting on the Barges skill to train, so mining wasn't worth it for me yesterday.

I did get the oportunity to run some higher level missions with my corp at one point which were very lucrative and full of danger and they let me keep all the loot!

Anyway, before bed I decided to do one last mission of my own (A New Venture - Healthy Competition 3/5).  It was an encounter near Synchelle IV - Asteroid Belt 1 in a dead space pocket, where I had to intercept a Supply Shipment out of the reach of Concord and basically blow it up to retrieve construction tools.

Firstly I was amazed at how beutiful the area was and I'm sure most of you come across this sort of thing, but for me it was my first time so I just had to take some pics.  Secondly and more annoyingly, the quest was either bugged or my weapons weren't powerfull enough, but the supply shipment's shield kept healing rather quickly.  I am obviously a noobie, but I had four guns (Howitzer 280mm Artillery 1 with nuclear ammo) trained on this thing for ages!  I managed to get the shield down to about half way, but when the guns reloaded I lost a lot of that.

Anyway here's some pictures of this nice looking area : 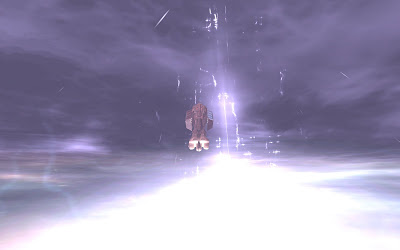 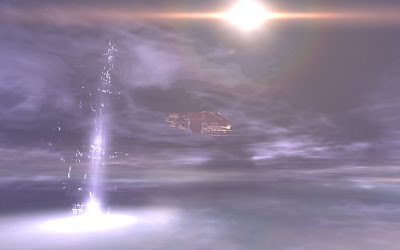 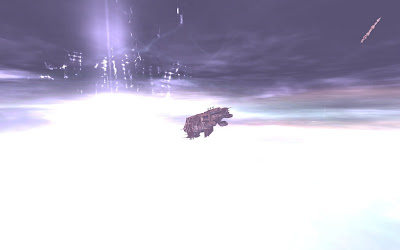 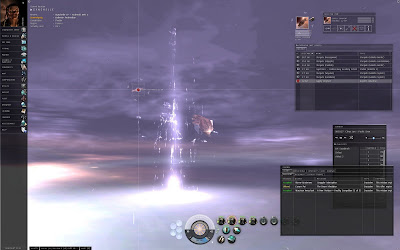 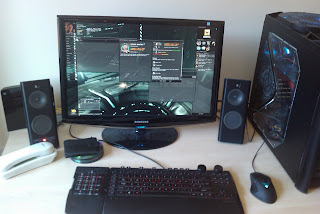 I've been having a read around various peoples EVE blogs and it seems this is the done thing, so I thought I would post up a picture of my EVE space.  I play EVE situated in a spare downstairs room in my house, which I call the "gamesroom".  Its not a massive room, but it's spacious enough to fit my pc one end of the room and at the other end a 50" 1080p Plasma for Xbox 360 games and Blurays.  The room has double doors which back onto the garden, so there's plenty of light IF I want (which I don't normally lol).  At the moment there's a bit of a void in the center of the room which will be filled with a nice leather 2 seater sofa and a table for board games.

As a side note, I'm quickly beginning to see why most people have more than one screen for EVE - the amount of windows one can have open at a time is ridiculous.  I'll probablly invest in one sooner or later, but that will also mean a new desk as mine is pretty small and won't fit another on. 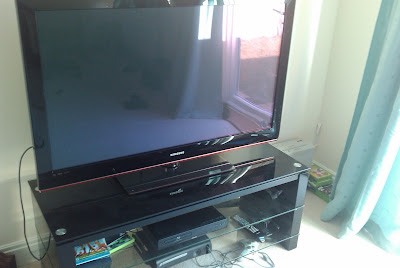 So, during my week or so in Enclave Industries our alliance were wardecced by Goram Industries for what I believe to be the third time.  I'm not entirely sure who's in the alliance (I should really find out!)  It's my first experience at war and after I relocated to Aydoteaux, mining operations were dodgy at best and after the alliance lost a couple of expensive mining ships, our CEO put a total ban on mining until the war was over.  His main fear was that such victories would spur them on to continue the war effort.  As it happened, they spent most of the time hiding in Stations and the war was not continued.  At present I'm training skills for mining barges so I can use bigger ships and make things a hell of a lot easier and I've just kitted out a ship (Thrasher) to be used as a combi for both salvaging and fighting.  Here is she: (I haven't named her as yet) 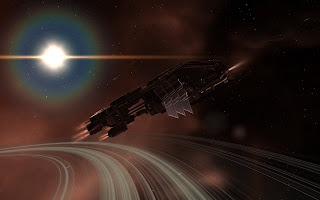